Grade I Listed building with interesting west window containing much of its original glass given by the patron Lord Fitzalan in about 1340 to mark his marriage into the royal family of Lancaster. He added the tower to the North, which also serves as a porch, to celebrate his victorious return from the battle of Crecy in 1346. A modern east window designed by Mrs Pippa Blackall AMPG, depicting the baptism of Christ by John the Baptist, was inserted in 2004. A small ledger slab to Fermor Pepys, a cousin to the diarist, is located in the chancel near the communion rails. 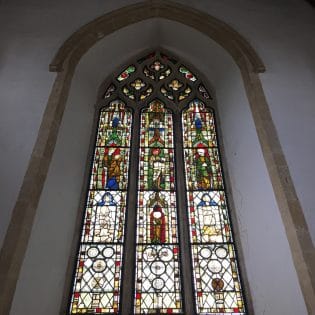