The pretty church of St Mary's dates mainly from the C14, 1330-1360, with a later Victorian porch built in 1882 when the previous one was blown over in a storm. Inside the church the space created by the north and south nave walls, running continuously and uninterrupted into the chancel, creates a beautiful simple space. The font is of Purbeck marble, no later than 1225, and may have been moved from St Margaret's. Graffiti in the nave south doorway includes shields with armorial bearings and possible travellers' crosses. During renovation work a C12 limestone coffin slab was found. The square west tower contains a single bell dating from 1722. Significant repairs were undertaken in the C18, when the 3 bells from St Margaret's were sold to finance the repair of the roof and tower. A further restoration was undertaken in 1864 by the Reverend John Dolphin, a first-class cricketer, who was rector of Antingham for 59 years. There are some fine pre-Raphaelite glass in the south chancel window, of 1865, which shows Mary Magdalen and Martha on either side of Our Lady. Mary Magdalen was designed by William Morris, the Virgin Mary by Burne-Jones and Martha by Dante Gabriel Rossetti. Burne-Jones was also responsible for the glass in the north chancel window. In the nave there are a number of brasses and floor memorials. Of particular note, is a significant memorial brass to Richard Calthorpe who died in 1554 " in the first and second years of King Philip and Queen Mary" and his wife, Anne, who died in 1562.He is shown in full armour; his wife's brass has been lost but below an inscription is a plate depicting their 16 children and 3 grandchildren. 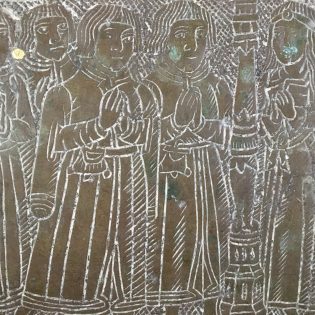 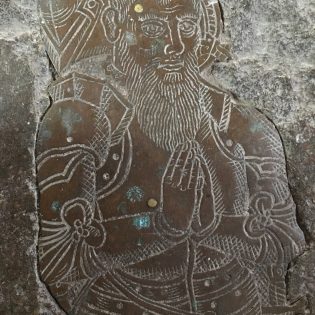 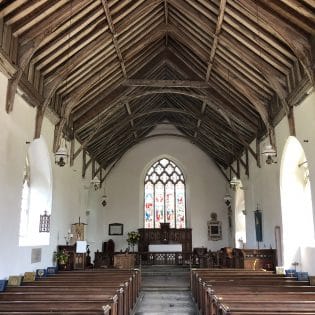 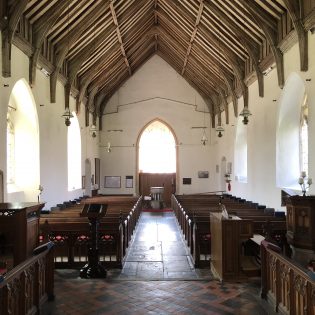