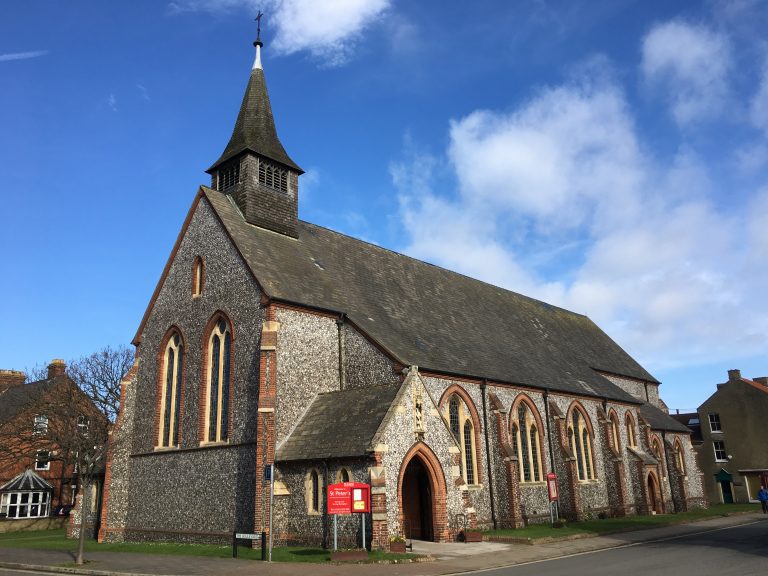 Early History. By Norfolk standards St. Peter's is a very recent creation. In a region graced by so many medieval churches, it is rare to find one from the Victorian era, but just as with many of those churches, St. Peter's came about through the generosity of a local family, the Upchers. They took their responsibilities for the local community seriously, providing a school, helping the local fishermen, labourers and their families, providing and supporting a lifeboat and encouraging the development of (Lower) Sheringham. It was as a result of their efforts that in 1842 a Chapel of Ease was built. A few years later it was enlarged to allow the seating of about 500 people. Services finished in 1897 with the opening of St. Peter's, the former chapel continuing to be used as a church hall until the Parish Hall in Waterbank Road was opened in 1956. The old chapel was eventually demolished in March 1969 making way for a modern block of flats, Temple Court. The Upchers donated the land on which the church is built and also contributed generously to the cost of the building itself, which was designed by St Aubyn and Wadling of London and built by Bardell Brothers of Kings Lynn. On St. Peter's Day 1895 the foundation stone was laid by Mrs Upcher and the building was consecrated exactly two years later on St. Peter's Day, 29th June 1897. Whilst it was being built, new houses were also going up on nearby plots sold by the Upchers in response to the new demand for housing. St. Peter's was built as the daughter church of All Saints, Upper Sheringham, and it wasn't until 1953 that it became the Parish Church of Sheringham following a boundary change when All Saints became part of the Weybourne Benefice. A Growing Church. The church is of red brick, faced with knapped flints, and roofed with slates. There are crosses on east and west gables, and a figure of St. Peter in the niche over the outer doorway of the south porch worked by a local stonemason. The building cost £8000 and could supposedly seat more than 700. Additions and improvements were made over the years. In 1910, the choir and clergy vestries on the north side were built. In 1928, the reredos (the decorated wooden screen behind the altar) was added. In 1930, the north and south sides of the chancel were panelled in oak. In 1931-2, the low screens at the top of the chancel steps were added. In 1933, the Chapel of the Holy Spirit was dedicated. Light and Space. The overall impression on entering St. Peter's is one of enormous spaciousness and light. with the wide nave extending into the side aisles. It has never had pews. In 2013 St. Peter's replaced its original chairs, see photo, with modern upholstered ones thanks to a legacy from Mr Mervyn Harrison. The interior is bold in design, an impression generated by the ridge of the roof, which is carried in one continual line throughout from east to west. The roof of the chancel is the same height as that of the nave. There is a plain stone font, and the pulpit and lectern are made from oak, a theme continued in the chancel with its richly carved woodwork. The floor of the nave is made of wooden blocks and the chancel and porches have splendid mosaic floors. Stories In Glass. Above the altar the story of the Ascension is depicted in stained glass, whilst in the Chapel of the Holy Spirit the windows show the Transfiguration, the Baptism of Christ and the Garden of Gethsemane. Along the south aisle are the windows depicting St. Peter, St. George, St. Andrew, St. David and St. Patrick, together with a very fine carving of St. Peter. On the north side are windows bearing the shields of the four Evangelists. At the west end, stained glass windows show symbols of Baptism, Communion, Confirmation and Marriage. Beautiful Music. In the Baptistry, on either side of the font, the wooden cupboards contain the electronic bells and the kitchen facilities, all cleverly blended into the fabric of the building. At the east end of the church is the organ, which was built by Bishop and Son of Ipswich in 1907. Over the years various improvements have been made culminating in a complete rebuild in 1986 means it is a very fine instrument. Combined with the excellent acoustics, this makes St. Peter's one of the most sought after concert venues in North Norfolk. In addition to the many baptisms, weddings and funerals that take place, the church is used for a whole variety of purposes, and is very much at the centre of the community. Stunning Hall. After almost 50 years of service the hall in Waterbank Road had become a major drain on parish finances. It was sold in 2003 and the proceeds put towards the building of a beautiful new one adjoining the church. The hall's dedication by the Bishop of Norwich on 11th May 2006 was the culmination of four years of determined fundraising and planning. Designed by local architect Ian Mutton, it blends in perfectly with the church and marked the start of a glorious new chapter in the life of St. Peter's. 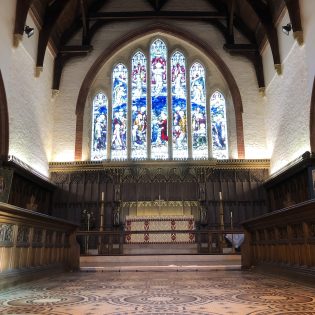 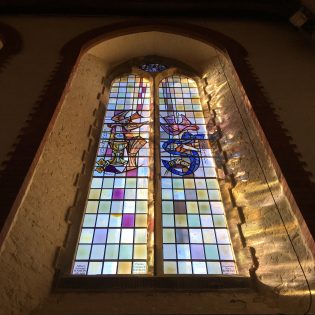